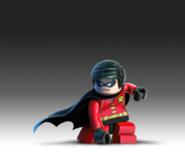 He came to Harbourside Theatre with Batman to crash Joker's party. After defeating Harley Quinn, Riddler, Two-Face, and finally the Joker, the Joker got away in his speedboat. Robin fixed his helicopter and took off, with Batman on the ladder. They stopped the Joker at the fair. At the Batcave, Bruce and Dick were dressed casually when Martian Manhunter called them. The Batcomputer detected an emergency at Arkham Asylum. Robin and Batman got dressed and raced to Arkham. It turned out the Joker escaped and the inmates were rioting. After the prisoners were accoounted for, Batman noticed black broken LEGOs with blue residual radiation. They went to Ace Chemicals, and found other pieces like the ones at Arkham and Robin asked if he could stop carrying the pieces. Batman and Robin found the chemicals promethium, xenon, mercury, tantalum, and dialum. Ace caught fire, and Superman (who Dick is a big fan of) saved them from falling. Superman left for a volcano in Mexico. The Batcomputer revealed that the chemicals could form an approximation of Kryptonite. Robin realized they need to call Superman, but Batman told him "We're not--going to call--Superman!" They chased Lex Luthor's Juggernaut and found the Kryptonite. Joker deconstructed the Batmobile, making Robin ask "Where's your car?" They went back to the Batcave and the Kryptonite turned out to be fake. The fake Kryptonite was also a homing device, so Joker and Lex broke into the Batcave. They defeated Joker and Lex, but Joker rolled a giant penny at them and deconstructed the elevator. Batman gave Robin permission to call Superman, and they escaped the Batcave. While Batman and Superman headed to Metropolis, Robin stayed behind to repair the Batcave. He built a multi-colored Batmobile, and met with Batman after Lex's election plans were foiled. Batman and Robin were chased by the Joker robot and Batman told Robin where to turn, so the robot's dropped Kryptonite formed Joker's face. Martian Manhunter called the Justice League, and Wonder Woman, The Flash, Green Lantern, and Cyborg responded. The Joker Robot tore up Wayne Tower, and Robin and the Justice League fought while falling from the tower. The entire Justice League then fought the Joker on the ground. Lex showed up in his Power Armor, and Robin used his Acro-Ball to control the Watchtower laser, and defeated Lex.

Retrieved from "https://alldatabase.fandom.com/wiki/Richard_Grayson_(Lego_Batman)?oldid=13365"
Community content is available under CC-BY-SA unless otherwise noted.