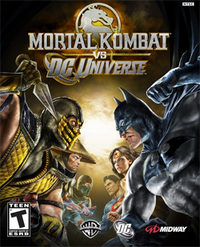 After Shao Kahn's invasion of Earthrealm is defeated by Raiden's forces of light, Raiden destroys Kahn by blasting him through a portal. At exactly the same time on Earth, Superman stops Darkseid's Apokoliptian invasion by blasting Darkseid with his heat vision as he enters a boom tube. These acts do not destroy either of them, but merges them into Dark Kahn, and causes the DC and Mortal Kombat universes to merge. As the worlds merge, the characters' abilities fluctuate, causing violent "rage" outbreaks that are actually the feelings of Dark Kahn being fused into the characters from afar. Because of this, certain characters either gain strength or vulnerability. This allows things such as the possibility of Superman being defeated due to his vulnerability to magic, and giving the Joker the ability to fight Raiden. With each world thinking that the other is responsible for the merger, they fight each other in Mortal Kombat until only one fighter from each side remains: Raiden and Superman. In the final battle, Raiden and Superman fight while Dark Kahn feeds on their rage. Both realizing that the other isn't working with Dark Kahn, they overcome their rage for each other and defeat their fused enemy, restoring the two worlds to their normal separation. While everyone else has been sent to their original universe, Darkseid and Shao Kahn have been switched and are both rendered powerless. In the end, they both face eternal imprisonment in the other's universe; Darkseid is restrained in the Netherealm, while Shao Kahn is trapped in the Phantom Zone.

Retrieved from "https://alldatabase.fandom.com/wiki/Mortal_Kombat_vs._DC_Universe_(video_game)?oldid=18340"
Community content is available under CC-BY-SA unless otherwise noted.