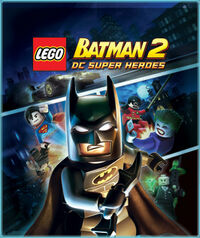 Bruce Wayne and Lex Luthor are at Gotham Theater's Man of the Year award, of which they are both candidates. Bruce wins, however, his victory is shortfelt as the Joker and numerous other rogues begin to loot the theater. Batman and Robin then track the villains one-by-one and send them all to Arkham. Shortly after, they are informed of a breakout at Arkham. The dynamic duo manages to recapture all but the Joker, who is still mysteriously missing. Batman identifies the device used for the breakout as Lex Luthor's but is forced to abandon the scene to stop the Joker, who is attacking Ace Chemicals. They laren he is processing fake kryptonite with Lex Luthor, and attack his VTOL, and escape with the kryptonite. However, it was a ruse for the Joker and Lex to locate Batman's hidden supply of kryptonite. They are rescued from the collapsing Batcave by Superman, and Batman and Superman go after their nemises.

Retrieved from "https://alldatabase.fandom.com/wiki/Lego_Batman_2:_DC_Super_Heroes?oldid=4373"
Community content is available under CC-BY-SA unless otherwise noted.