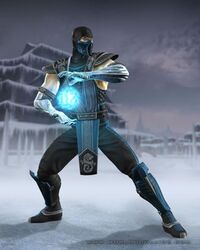 Liu Kang first thought the Lin Kuei were responsible for the disappearing warriors. Thinking Liu Kang was also responsible for the disappearance of his own clan, Sub-Zero challenged and was defeated by Kang. However, he allied himself with the monk when Kang told him of their own forces disappearing and then Kang saved him from Scorpion. Retreating to the Lin Kuei temple, he found the Fortress of Solitude had appeared. Sub-Zero went down and froze Superman in ice. Wonder Woman sought out Superman and defeated Sub-Zero, taking him prisoner and freeing the Man of Steel. At the U.N. orbital station, Captain Marvel was on a rampage and seemingly disentegrated Green Lantern (but he really was transported to Oa). Wonder Woman defeated Marvel to calm him down. Wonder Woman was defeated by Jax, who also decided to free the Lin Kuei warrior and take his offer of help.

Sub-Zero sought Raiden's help, thinking Quan Chi might be able to explain more about these new warriors. Raiden didn't trust the Lin Kuei or Sub-Zero, and challenged him. Proving himself to be more powerful than his deceased brother Bi Han, Sub-Zero stood successfully against the thunder god and earned his trust. Raiden had Sub-Zero seek out Scorpion as a means to the Netherrealm. He followed Scorpion's trail to Gotham, and after a victorious battle against Deathstroke, Sub-Zero ended up in the Bat Cave where Scorpion had once been; he was confronted by a raged Batman, but defeated him. Scorpion then brought Sub-Zero to the Netherrealm by his spear. The two battled and accidentally freed a chained Quan Chi. The sorcerer managed to convince both ninjas and Raiden that all rivalries had to be put aside if they were to stop the new invaders. Sub-Zero was forced to team up with Scorpion and faced off against Catwoman and Lex Luthor at the White Lotus temple. Sub-Zero froze Catwoman in place, but both he and Scorpion were defeated by Luthor. In the battle between the D.C. warriors, Sub-Zero fought against Batman once again. The outcome of the battle was unknown, although Batman was later seen talking to Superman, while Sub-Zero was nowhere to be seen. Superman and Raiden then teamed up and defeated Dark Kahn and saved the realms.