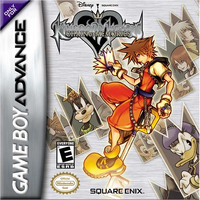 The Appearances in this Video Game are unknown.

Sora, Donald, and Goofy walked down a long path that seemingly went nowhere. They saw Pluto and followed him. He led them to a crossroad. While deciding which path to take, a mysterious man in a black cloak approached Sora and spoke to him, but at that moment his words were incomprehensible. The path became one and it led them to Castle Oblivion. The cloaked man appeared as they entered the castle and gave them a card. They used the card to proceed through the castle. The first world they went to was Traverse Town, where they discover that Leon, Aerith, Yuffie, and Cid have forgotten all about them, yet they strangely remembered Sora's, Donald's, and Goofy's names, where Yuffie said, "You're not in my memory, but my heart remembers you." After Leon gave Sora a tutorial on fighting and gave Sora a Simba summon card, they leave Traverse Town.

The man appeared once more after they arrived on the next floor. Another cloaked man appeared and introduced himself as Axel. Sora fought him, and when Axel is defeated, he gave him more cards, and disappeared soon after. Sora, Donald, and Goofy went through each floor, experienced their memories, all of which were somehow distorted, each in a different way. They started to lose their memories. A girl named Naminé replaced memories of Kairi with fake ones of herself. It turned out she was good and was manipulating his memories under the orders of the head of the castle, Marluxia. This escalated to a final battle in the end, for Sora's life, and Naminé's freedom.

Meanwhile, Riku awakens down in the castle, and as he goes up the basement levels of Castle Oblivion, he must take control of the inner darkness inside of him, dealing with Ansem, the Riku Replica, and three members of the Organization; Vexen, Lexaeus, and Zexion, along the way.

The cast of this Video Game are unknown.

Retrieved from "https://alldatabase.fandom.com/wiki/Kingdom_Hearts:_Chain_of_Memories_(video_game)?oldid=18731"
Community content is available under CC-BY-SA unless otherwise noted.