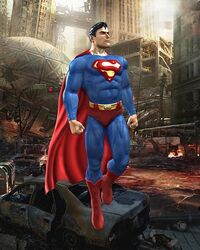 Base of Operations
Fortress of Solitude

Superman defeated Darkseid and stopped him from destroying Metropolis. When Darkseid attempted to escape via Boom Tube, Superman used his heat vision to blast him back to his place of origin, Apokolips, seriously injured. However, he actually destabilized the Boom Tube and accidentally merged him with Shao Kahn. After Darkseid's apparent defeat, he turned Lex Luthor - who was working with Darkseid to ensure humanity's survival - to the authorities.

Shortly after, during the merging of the two universes, Superman's powers began to weaken. He went to his Fortress of Solitude after hearing it was breached, but was soon attacked and imprisoned by Sub-Zero in ice. Wonder Woman soon defeated Sub-Zero and freed Superman. After hearing that Darkseid may still be alive, he returned to Metropolis, only to encounter Scorpion, who was looking for Kitana. Though Superman didn't understand his intentions, Scorpion battled and defeated Superman.

Superman later encountered Lex Luthor (who has apparently escaped from prison), Catwoman, The Joker, and Deathstroke, along with Captain Marvel, who informed them of Darkseid's transformation into Dark Kahn and were forced to team up with the criminals to defeat Dark Kahn. Superman later went to the Fortress of Solitude once again, this time with Green Lantern, where they encountered Shang Tsung and Liu Kang. Superman faced Shang Tsung, but was ultimately defeated. He and the other heroes and villains soon used the portal in Jax and Sonya's base to be taken to Apokolips, which was in complete chaos.

They soon found Raiden and the other Mortal Kombatants, who challenged them. However, Dark Kahn soon arrived and everyone lost control of the Kombat Rage. After a huge battle, neither side won and Superman and Lex Luthor soon turn against one another, blaming one another for Dark Kahn's creation. Superman defeated Luthor, but was interrupted by Batman, who regained control of the Kombat Rage. Though Batman was defeated, the battle allowed Superman to regain control of the rage. He later encountered Raiden and after a decisive battle, they realized that neither one was siding with Dark Kahn and worked together to defeat him, separating the two universes and splitting apart Shao Kahn and Darkseid. Only Shao Kahn remained and was apparently powerless, he was imprisoned in the Phantom Zone.

Retrieved from "https://alldatabase.fandom.com/wiki/Kal-El_(Mortal_Kombat_vs._DC_Universe)?oldid=19187"
Community content is available under CC-BY-SA unless otherwise noted.