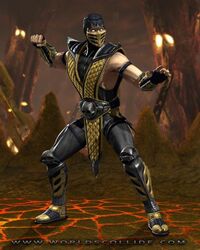 Scorpion first interrupted a battle between Liu Kang and Sub-Zero. After a losing battle with Liu Kang, Scorpion switched places with the Flash and was captured weakened by Batman. Scorpion escaped and later brought Sub-Zero to the Netherrealm and the two battle, freeing Quan Chi. Quan Chi sent Sub-Zero back to warn Raiden that alliances needed to be formed to stop the world merging, and then he sent Scorpion to look for the Princess Kitana. Scorpion went to Gotham, where he confronted the Joker who foolishly tried to take on the ninja spectre and was thrashed by him. Not finding the princess there, Scorpion ventured to Wonder Woman's island. She refused to let Scorpion wander the island, so he fought the princess and bested her. Scorpion then went to Metropolis, where he was met by Superman. Annoyed with the Man of Steel, Scorpion turned out to have an advantage due to Superman's weakness from magic. After the fight, an enraged Kitana appeared and Scorpion, with no other choice, beat her unconscious. Quan Chi then appeared and ordered Scorpion to take her to Raiden. Awake, Kitana informed all the Kombatants of the being known as Dark Kahn, who was the focal point of the worlds merging. Scorpion teamed up with Shang Tsung and Baraka to take on Captain Marvel in the Netherrealm only to be defeated. Scorpion was then forced to work with Sub-Zero, and they made their way to the Wu Shi Academy, where they confronted Lex Luthor and Catwoman. Though Sub-Zero froze Catwoman in place, he and Scorpion both were defeated by Luthor. The Kombatants regrouped back at Raiden's Temple with Kano reporting his loss to "a jester with a twisted face" as Scorpion called him. Lui Kang and Shang Tsung arrived. As Shang Tsung mocked Kano for getting defeated by a clown, Liu Kang explained the energy shifts. Kano, overwhelmed by the rage attacked Shang Tsung but was beaten again. However, Sonya stopped him from killing Kano because of bigger issues. Sonya contacted Jax but Raiden teleported him down so that Sonya could speak to him personally. Jax reported that the DC forces used his portal to go to Outworld. Kitana opened a portal and the Kombatants stepped through it. They saw Outworld in ruins. Kano noticed the DC forces. Raiden negotiated with Superman and the Kombatants dropped onto the crater. Raiden challenged Superman's army in Mortal Kombat. As they prepared for battle, Dark Kahn arrived and encouraged everyone to fight. Both sides charged at eachother. Scorpion fought the Flash, but almost everyone ended up unconcious. Scorpion and the other Mortal Kombatants arrived at Shao Kahn's throne room after Raiden defeated Dark Kahn. Everything was back to normal, except that Shao Kahn was replaced with Darkseid, who Raiden imprisoned in the Netherrealm.