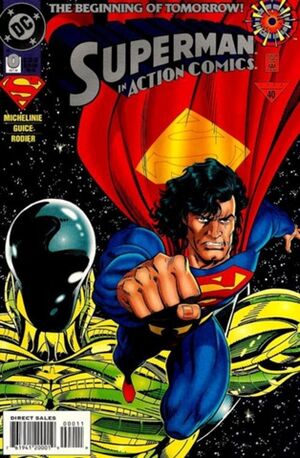 No one dies today

Appearing in "The Yesterday Man"

Synopsis for "The Yesterday Man"

After his most recent bout with Conduit, Superman returns to Lois Lane's apartment, to make sure she is okay. He then takes off to track down Conduit.

Conduit meanwhile, surveys activity within the Pipeline. He reflects upon the time some years ago when he was an operative for the CIA. Ultimately, he became too much of a loose cannon, and the CIA tried to take him down. Conduit killed his attackers and went rogue, forming his own rival intelligence network – the Pipeline.

Now he intends to disrupt a public Daily Planet dedication ceremony. Conduit flies in and tries to kill Clark Kent on the street. Clark pretends to fall through the rubble and uses the moment to change into Superman. Conduit uses Kryptonite coated tendrils to keep Superman at bay, but the hero eventually defeats his rival and Conduit is arrested. Conduit now bears a grudge against both Clark Kent and Superman.