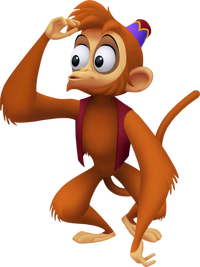 Base of Operations
Agrabah

Abu and Aladdin explored the Cave to get a lamp but they got trapped in a sand pit. Once the duo was free from the sand pit, they helped Sora, Donald Duck (Kingdom Hearts games), and Goofy.

When Sora and Aladdin explored the chambers in the depths of the Cave of Wonders, they were occasionally blocked by a puzzle which involves a statue holding a large, red gem. Abu leapt from Aladdin's shoulder to the statue and tapped the statue's gem a few times with his hands. The gem glowed, Abu leaps back to Aladdin they continued exploring.

Roxas came to Agrabah and found Abu causing mischief. He was confronted by Aladdin in the Marketplace, and yelled at by his friend for committing theft.

A year later, Abu has again gotten in trouble when he stole a black lamp from The Peddler's shop. Aladdin forced him to give the lamp back, only to discover moments later that it was the lamp Jafar was trapped in. Abu followed Aladdin, Sora, Donald, and Goofy to the Cave of Wonders, so they can obtain some treasure to purchase the lamp back from the Peddler. It is here that Abu activated a trap when he grabs a floating gem, but quickly helps Sora solve the puzzle.

After the group defeated the Blizzard Lord and the Volcanic Lord, Abu tried to get away with a gem he swiped from the Cave of Wonders, but Donald took it from him and tried to keep it for himself.